What I could do without

Today we went to the beach by Jeff’s work. There was warm water, nice sand, a fun climbing structure, and a shower, BUT there was a quick drop off for the water so the kids could only play in the waves and I still wanted to hold both their hands. I am hoping there is more shallow water at a different closer beach.

You could totally tell we were not natives to the area. First my kids were the only ones in sight with sun shirts on. Second, I was the only women in a 1 piece under the age of 65 and even then only 4 people were wearing one. Plus many women were without tops and I found myself nervous Abby might attempt a feeding from one of them (She’s been very into milk these days). Who knows maybe in 2 years I will be wearing ½ a bikini, Jeff will be in a banana hammock, and the kids in their birthday suitsJ

Note from Jeff: I will NEVER wear a speedo or banana hammock to the beach. Also, most of the topless women were not the type you would want to see without a top on – lots of bad naked. 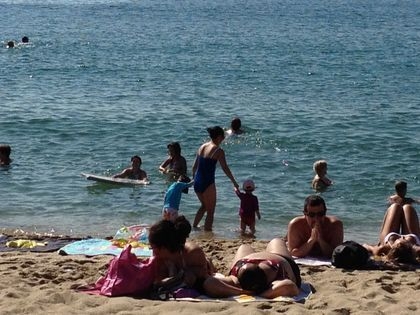 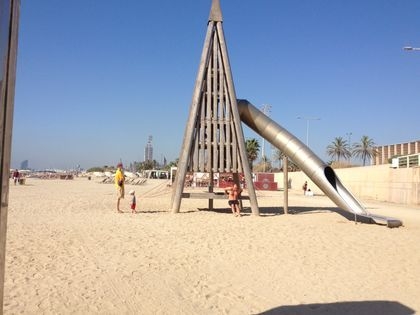 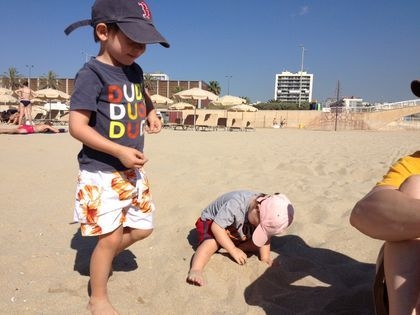 Today we went to Montjuïc, which means Jewish Mountain in Catalan and is named for the old Jewish cemetery that adorns the mountain side. The plan was to go to see some great views of the city and most importantly to Emmett, explore the old Castle at the top of the mountain. Well, we had a blast getting to Montjuïc on the metro and funicular, but, unfortunately, we didn’t bring enough cash or a Visa credit card to go on the gondola to the very top where the castle is. Note to all potential visitors: American Express is not widely accepted here.

The kids were resilient and we ended up having a great day making it part way up the mountain on foot (we are getting lots of exercise here). We ate a snack by a lower fountain (see video) and then we went exploring around the lower garden. We found the coolest playground which had pulleys and troughs for pulling and moving sand, there was a rope bridge (that Emmett mastered his first try) and a rope swing (see picture). We continued up to find a huge fountain area, with amazing city and sea views, lots of pigeons (Abby is OBSESSED!) and these fun stepping stones which crossed the fountain - Abby had no fear and I could barely get her to hold my hand. On the way down we found another smaller play area with different pulleys, levers and jumping pads that make music. Abby passed out on the way home, and I can’t believe Emmett didn’t either since he walked most of the way. 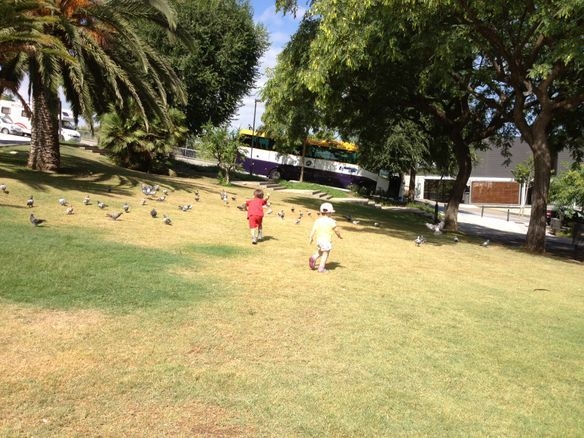 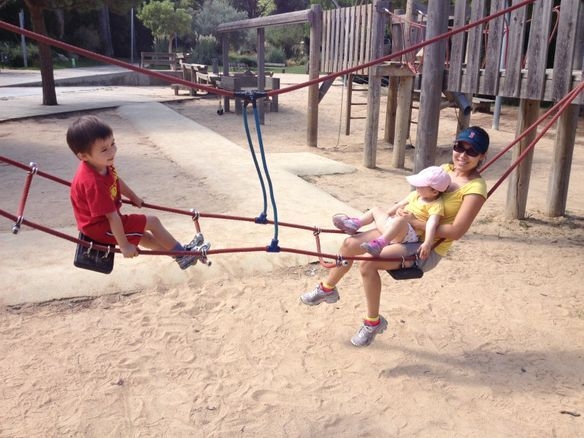 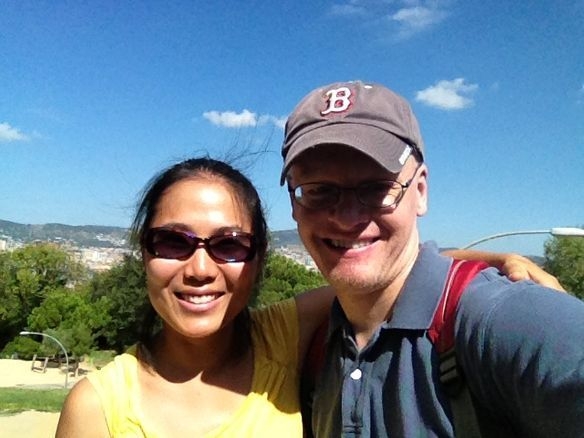 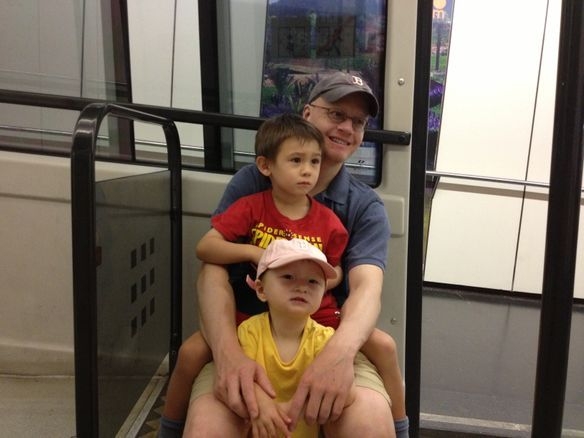 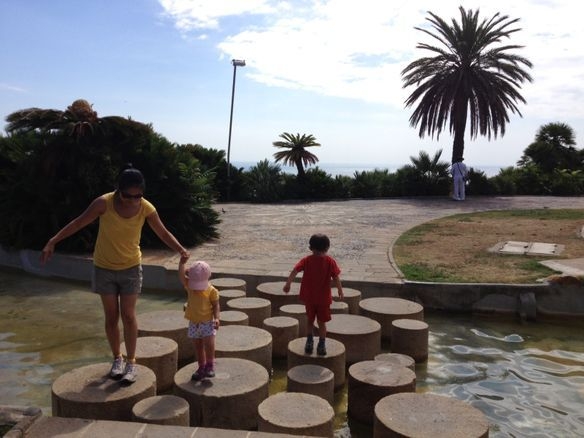 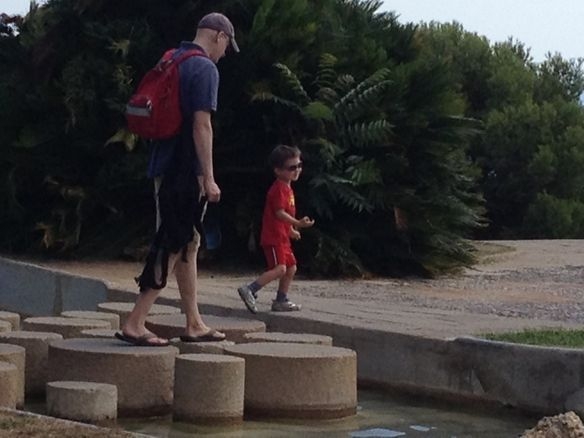 Today was our first of presumably many trips to the Barcelona zoo. We decided to trek the 30 or so minute jaunt by foot, which proved to be a nice walk through Eixample, the Arc de Triomf and the Ciutadella park. Upon entering, we were quickly impressed by the size and aesthetics of the zoo – all of the habitats looked like nice places for animals to live (the one for the Komodo dragon was particularly impressive). All in all, we had a great time there and were only able to see about half of the animals – good thing we also purchased a Zoo Club membership. For Abby, the highlight for her was when a pigeon ventured in to the dolphin show and perched in the rafters – it figures her favorite part of the experience was the ubiquitous bird. For Emmett, his favorite part was the baby and mama monkey. After going through the zoo at a break-neck pace he stopped and took a lot of time to watch the cute baby monkey play with and get groomed by its mother. For us, it was a toss-up between the orangutans, the hippos (also a great place to sit and have a snack), the aforementioned Komodo dragon, and the elephants. We are looking forward to our next visit to see more of the animals we missed (lions, tigers and bears – oh my), seeing the sea lion show and giving the kids a run at the neat looking playground in the zoo. 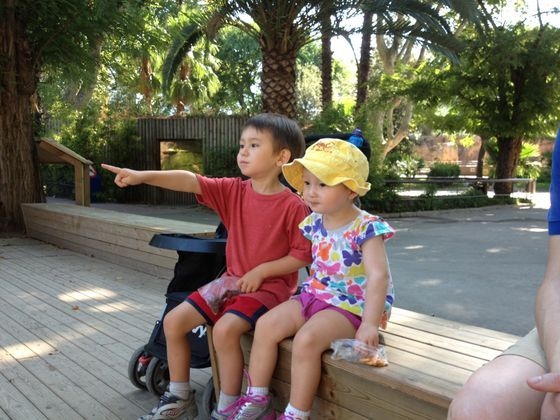 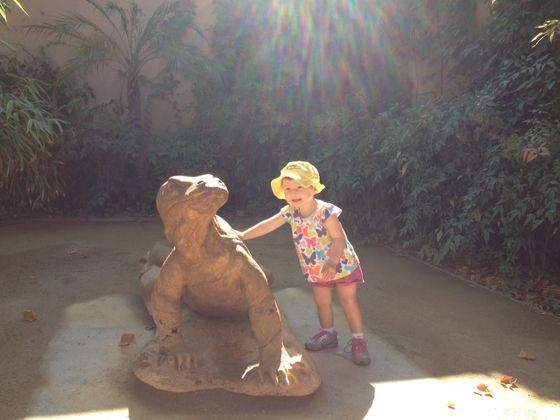 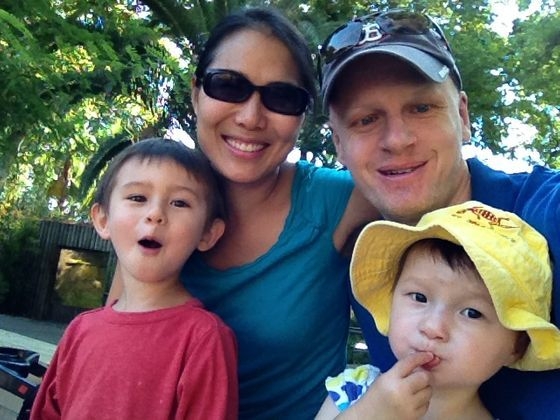 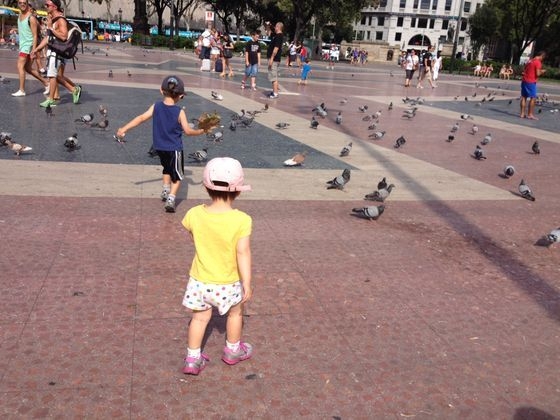 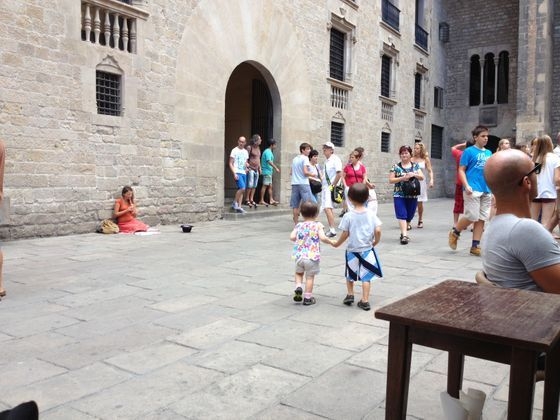